Back to all posts

Daniel Ek and the Manufacturing of Music

Recently, Spotify CEO Daniel Ek gave an interview espousing, what would quickly become, an unpopular point of view regarding the process of creating music and the once relevant album cycle. You can read the interview with Music Ally here.

Several Singers, Songwriters, and Musicians came forward to bash Ek's statements. If you're using any of the social media platforms you've probably read some of them. I have to write that David Crosby, Sebastian Bach, Dee Snider, or Mike Portnoy do not represent me. And while I agree with their sentiments, I am not at their level. I am a virtual NOBODY in the music world however, I believe strongly that there are more like me than like them. I can see already that my thoughts are crossing the double yellow line into the divisive and that's not what I want to convey here. Let me get back on track...

Regardless of an artist's popularity, the problem is that Singers, Songwriters, and Musicians, are having their livelihoods whittled away. Spotify and their ilk (the subscription services model) are significant reasons why. And in the process of not compensating most artists fairly, creativity is taking a huge hit with a hook that's all too memorable and long-lasting. Ek claims that artists need to produce more product in order to see a greater return <sigh>.

I would dare to write that Mr. Ek has no idea what it takes to produce an album's worth of music, but it's not an assembly line. It would seem that Mr. Ek is sorely missing the point and yet we continue to put a microphone in front of him and people like him.

For a little over twenty years the sale of music has seen several formats come and virtually disappear. Complete albums on vinyl, cassette, and CD. Single songs on vinyl, cassette, and CD. Albums made available digitally. Singles available digitally. Streaming. And streaming led to the death of the album. We're now back to where it all began with Rock and Roll in the 1950's - the single song. While formats evolved (really?), pay streams did not. They diminished to the point of mere fractions of pennies per stream. That graph would be fun to look at. Kidding.

Here's a recent statement from CD Baby accounting for a few Spotify transactions that took place on April 30, 2020: 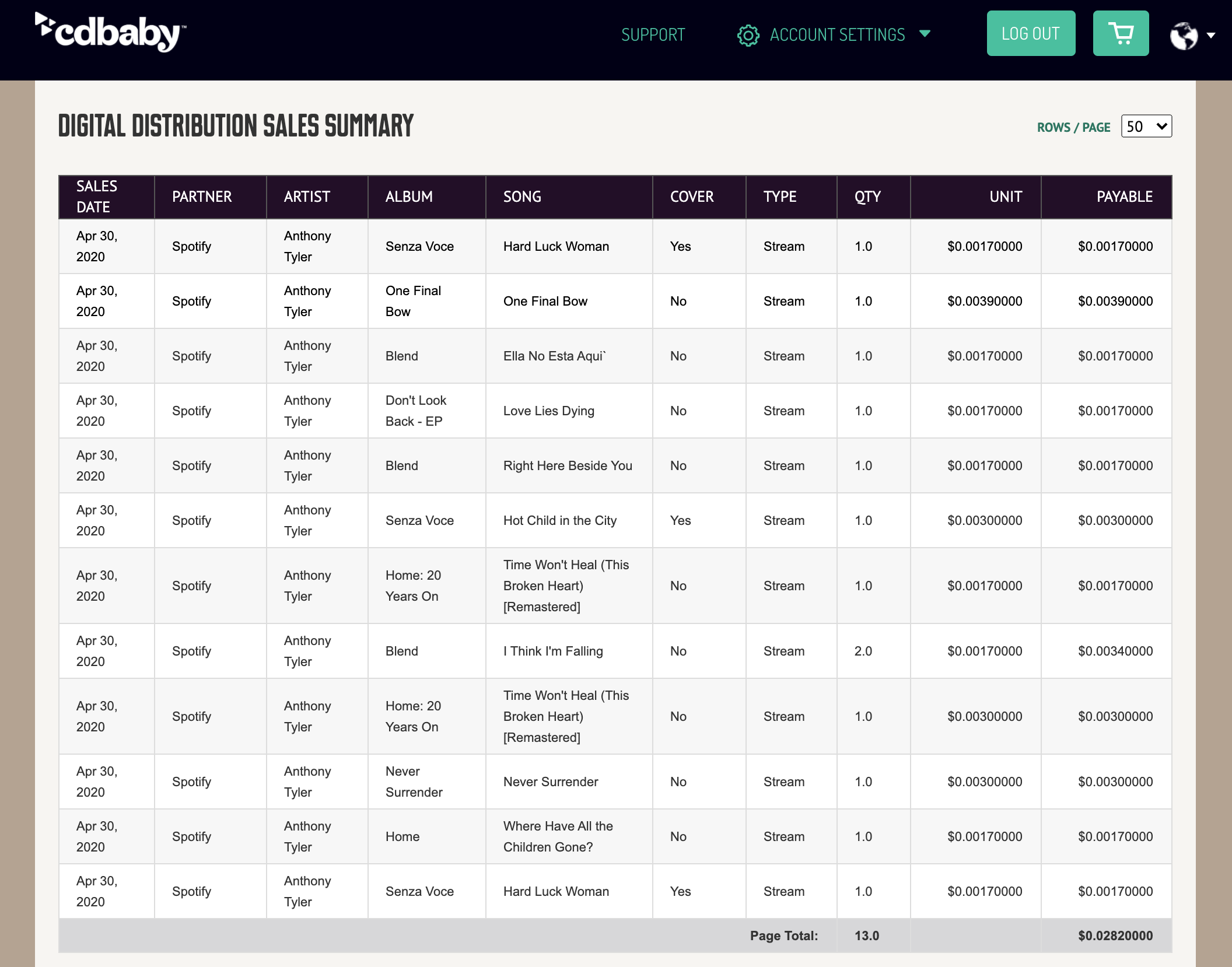 I have always viewed one single stream = one single purchase. Subscriptions don't address this. You pay a monthly or yearly fee and you're happy. That fee makes Daniel Ek very happy. "How could this be a bad thing for anyone?," you might ask. I get it. However, you have to at least try to see that there's a bigger picture at play here. Working off my point-of-view that a single stream is worth a single purchase: In 1992 a physical single CD release sold for $3.00. I earned $1.50 from that sale. Now, via streaming services, I am paid less than a penny per stream. It seems ridiculous that in thirty years the value of one song to a listener, would have decreased so significantly just by virtue of the fact that it's digital. The digital-ness of my music doesn't change the value of it (not to mention what it actually costs for me to produce that album or single).

Convenience is not what I'm selling. That's the job of the streaming services.

Streaming is all about convenience. The Buyer's convenience. Not mine. If a single stream of a song were viewed as a single purchase (adjustments being made regarding digital files versus a physical item - I get it), artists would have a chance to continue making music on their own dime and timeframe. Artists you might actually like. I'm not including myself in that list, but I am saying artists need a much more balanced return on their investment and their work.

Now to address the thrust of Daniel Ek's idea that creativity is equal to that of the manufacturing processes found in today's world - Mr. Ek, with all due respect, sit down and be quiet. The creative process is an elusive beast. It doesn't work on anyone's time but the one trying to create something. Placing product before creativity is a huge mistake and one that's been made for generations. It's a business person's mentality. Period. Please stay in your lane, Mr. Ek. I guess the larger issue here is one of the Emotional versus one of the Economical...

...and to that end, I've never believed art and commerce belong in the same bed.

Support your favorite Music Artists by purchasing their work directly from them.